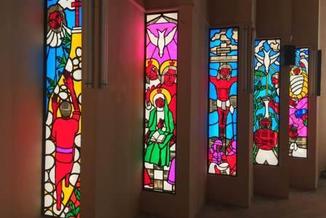 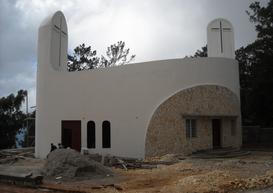 A Rich in Mercy Institute grant, made possible by the generosity of the Bozzone Family Foundation (New Kensington, PA)  supported the production and installation of the magnificent windows!

Because of the long history of service by the Congregation of the Holy Spirit (Spiritans) to the Church in Haiti through education and pastoral ministry, several prominent Haitian artists contributed their time and talent to design a functional worship space that not only serves the larger congregation, but stands as a landmark of Haitian sacred art!

Albert Mangones, famous for his statue of the “Fugitive Slave” which stands across from the former site of Haiti’s national palace, designed a statue of Christ for the original church.  His son Frederick Mangones contributed the design of the new church building.  The most outstanding feature of the new church is a set of 15 stained glass windows designed and executed by Patrick Vilaire, Haiti’s most celebrated living artist.

Following the massive earthquake that devastated Haiti in 2010, the St. Paul parish in the mountain community of Furcy nearly doubled in size due to a flood of “earthquake refugees” fearful of continuing to live in urban Port au Prince and its environs. Under the pastoral leadership of Spiritan priest Fr. Habens Simon, CSSp, the parish undertook the construction of a new church large enough to accommodate the increased population